Menu
Cart 0
Those of you with children will probably know that last Thursday was World Book Day. A day where parents across the world find themselves frantically trying to cobble together a book themed costume for their little ones. The majority of our previous outfits have been thrown together the night before with mild panic and crafty skills. Unsurprisingly for anyone who knows Milo, last year he was Harry Potter. The year before that he was Charlie Bucket and I think the year before that he was a pirate from Captain Hook's ship. 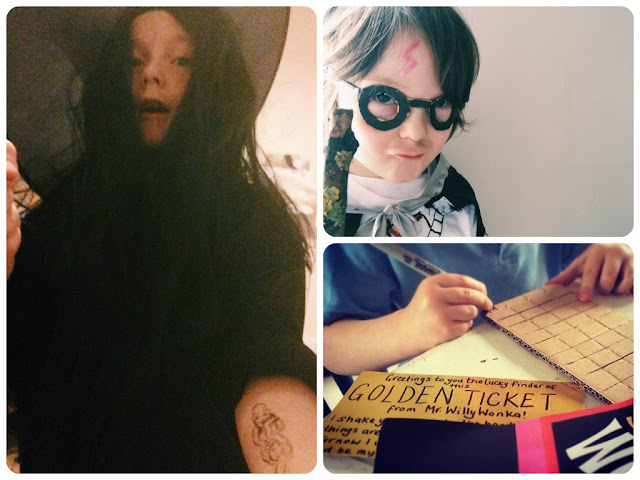 This year he initially declared he wanted to be Hermione Granger. I have no issue with Milo choosing to be a girl for the day (for Halloween he was Bellatrix Lestange - do you sense a theme here?) but my main objection was spending money on a new wig. His Bellatrix wig soon found itself in a horrific mess of knots and tangles. Once he was informed I would not be purchasing a wig, it turned out that having 'nice hair' was his main reasoning for his costume choice and he quickly started to come up with other suggestions.

Deciding to use his already existing freckles to his advantage he thought he would like to be a Weasley twin, but after much indecision on which twin to be, I suggested he might prefer to be Ron, turns out he didn't realise Ron also had freckles. So Ron was chosen. To which he quickly requested 'a Molly Weasley jumper with a R on it please Mum'. I cannot resist the request of knitting from Milo, I was thrilled when he asked for a school jumper over the summer, however my initial response of 'oh yes of course I'd love to Milo! What colours shall we do?' was met with thoughts of 'how realistic it is to knit a jumper in a week?'! 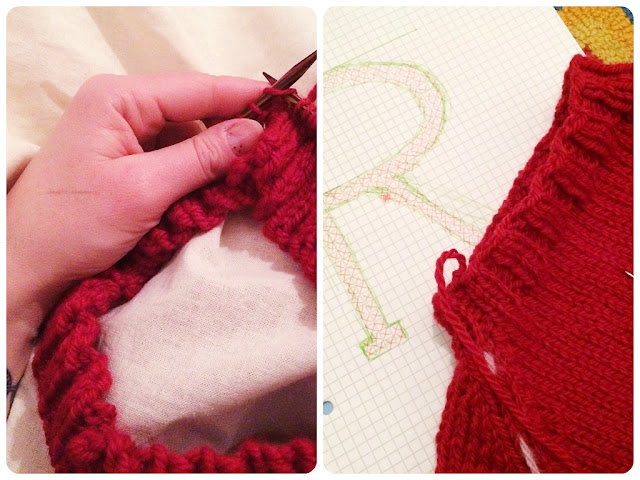 But do you know what, if you love someone that much, you can knit them a sweater in a week. Even when you run out of yarn and have to spend 3 of those 7 days waiting for more to arrive and especially if you don't mind staying up until 2.30 the morning of World Book Day to get it done! 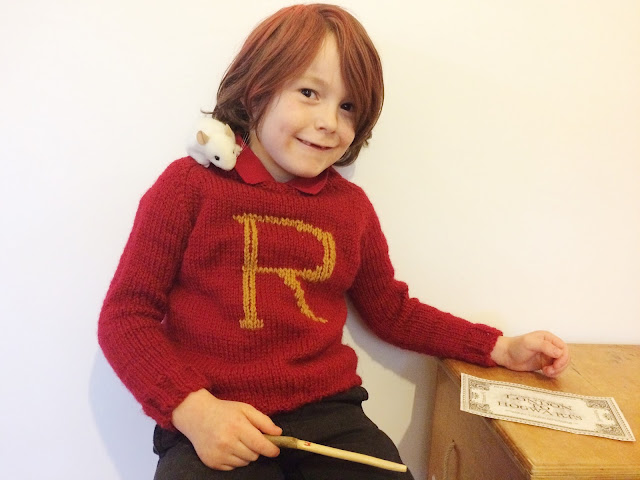 I didn't use a pattern (though in retrospect that would probably have been easier) I didn't even swatch. I just took a couple of Milo's measurements, took the ball band's suggested gauge as read and cast on. I did a really simple bottom up raglan, with ribbing on the bottom, cuffs and neckline. I decided to use duplicate stitch for the R, figuring that would be easier than attempting to learn intarsia, plus if for some reason he decides he doesn't want an R emblazoned across his chest I can remove it easily and the sweater can still get some use. 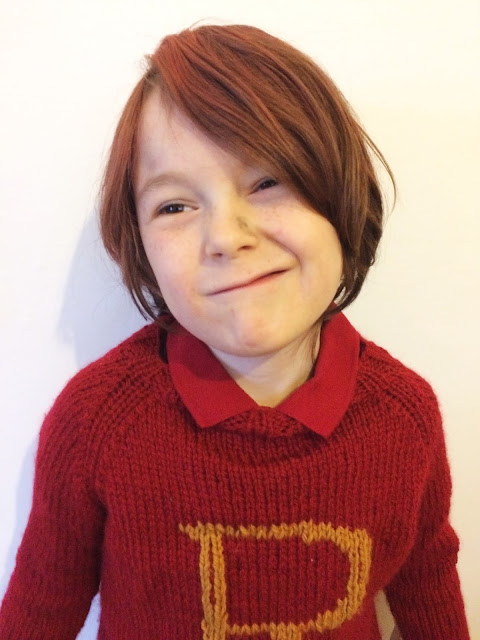 I used Drops Alaska in dark red for the main body of the sweater and the mustard yellow for the R as it was nice a chunky, perfect Gryfindor colours and I already had some left over from the crochet blanket I made over the summer.

It was totally worth a couple of late nights to see the look of awe on his face on Thursday morning, plus he looked amazing! We added a wand, some orange hair chalk, Scabbers the rat and even a dirty mark on his nose.

Lots have people have asked me for the pattern. I'm afraid I don't plan on writing it up at the moment, that's not to say I never will, but not in the foreseeable future. However if you found yourself a nice simple sweater pattern it really would be simple enough to add an initial to the front of it.