After such good intentions to return to the world of blogging and all things internet based on Sunday, I was struck down by a horrible sickness bug on Monday, which made me pretty much incapable of anything! Which is why it's taken me up until now to actually write a proper post with pictures to share and everything!

I made these paper flowers during the festive season, and they sat amongst the branches of our Christmas tree until he came down (a little late) on Tuesday. 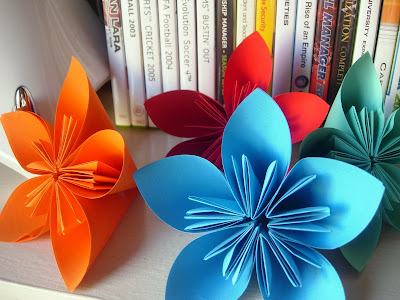 They are now sitting on the shelf which houses our embarrassing amount of computer games, of which only a few can be glimpsed in this photo. Rather frustratingly I can't find the link for the site which I got the instructions from now. Even more annoying as I intend on making more and clustering them together in a big ball. I'll keep looking and hopefully will be able to add it to this post in the future.

I was really proud of how they turned out and they were actually surprisingly simple to put together. 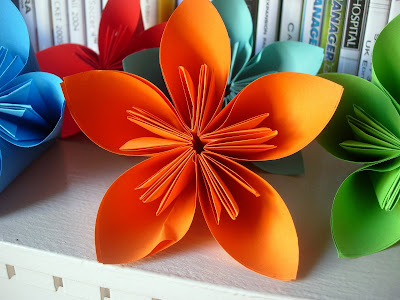 They look really lovely on the shelf...almost as lovely as they did on the Christmas tree.

I think my nesting instinct is starting to kick in already, as I spent the whole of yesterday rearranging, tidying and cleaning our lounge, and I had a dream last night that the baby came early and we weren't even slightly ready, we had NOTHING! No where for him to sleep, nothing for him to wear and no way of going out to buy anything because we had no pram or sling! On the plus side of the dream, I didn't even need to go into hospital because the labour was so quick and painless!

Only 14 weeks left now and only 4 weeks left of work! Which in theory will give me plenty of time to prepare for his real arrival!