Menu
Cart 0
Finally managing to get a little bit of time to catch up on all we've been up to over these past few weeks of the holidays.  Midway through the first week of the summer holidays, Milo and I headed up to Norfolk to visit my family and get a few days of beach time in.  Although the weather was looking pretty lousy it actually turned out beautiful, we managed to visit 5 different beaches, spend a day at a beer festival with my Dad, have picnics with Milo's cousins, watch the Lego Movie (many times) and paint in my Mum's shop, all within the 4 days we were there.  It was much much fun! 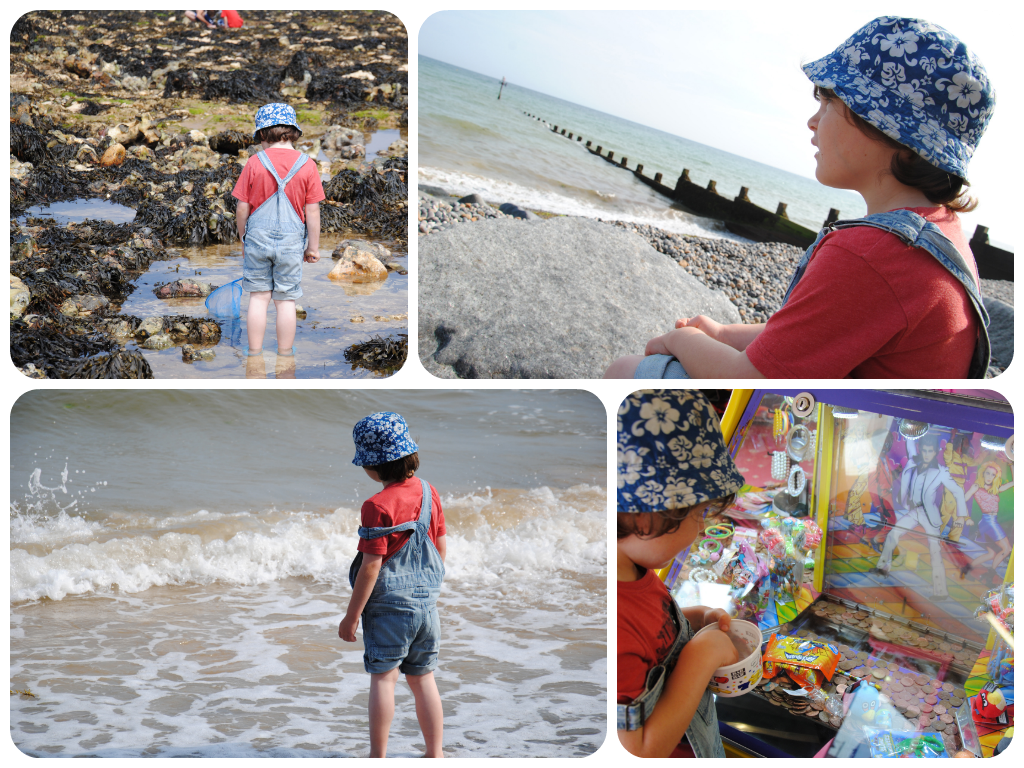 On our first day Milo and I rose pretty early excited about visiting the sea.  We decided to do a beach crawl! Starting at my Mum's little village, Weybourne, we got a bus over to Sheringham.  There we visited the beach, walked along the prom, played the 2p machines in the arcade and ate ice cream.  I spent a lot of my teenage years along Sheringham's prom and I love being there so much.  In my opinion though not the best beach along that strip and certainly not the nicest for swimming. 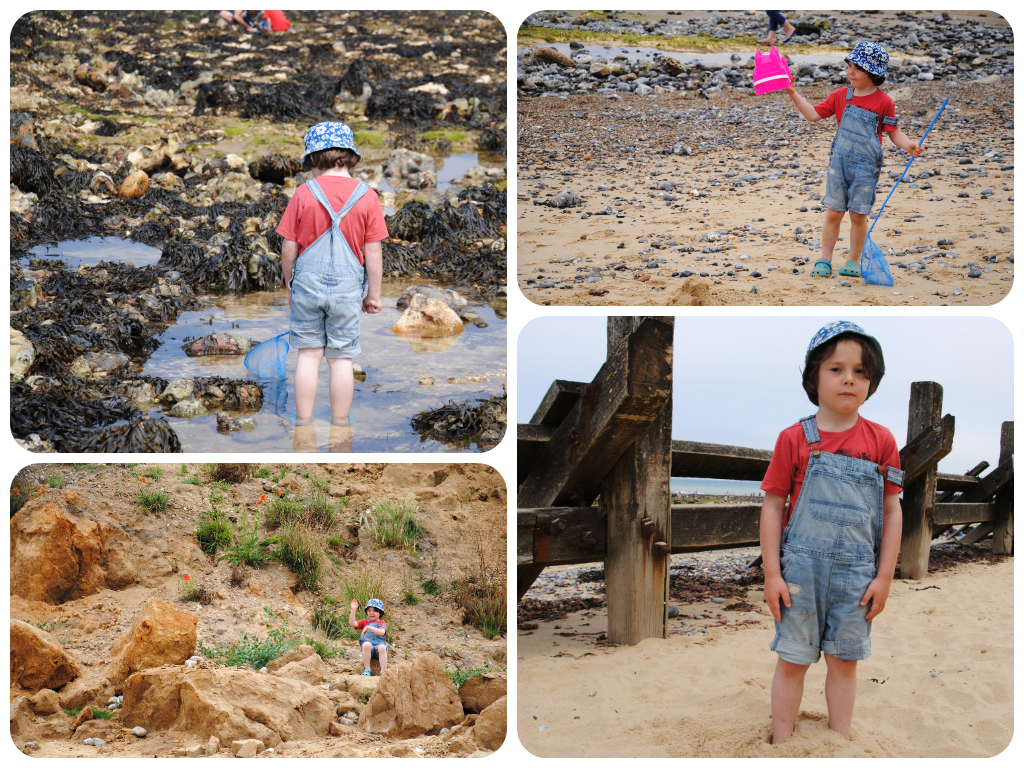 Next up was West Runton, we hoped on another bus and found our way further east along the coastline.  This is a great beach for rock pooling and fossil hunting.  Milo bought himself a net and (entirely inappropriate bucket for crab catching purposes) and we hunted the pools for hours.  We didn't catch much, but we saw lots of fish, crabs, snails and anemone.  Again I'm not sure this is really a great beach for swimming, but in terms of activity it's great and was perfect for the coolish day we were there.  Milo loved hunting for fossils, climbing the cliff side, building sandcastles and of course the aforementioned rock pooling. 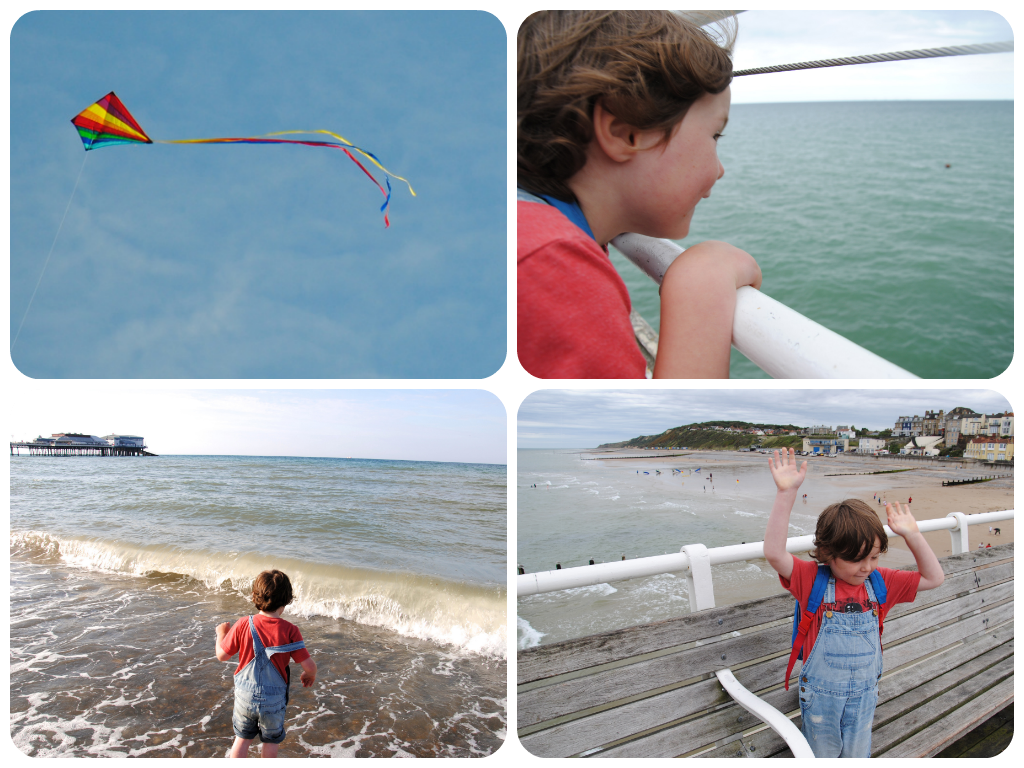 Not wanting to stop at one beach too long, we headed back to the bus stop and headed yet further east, along to Cromer.  I love Cromer, proper traditional British seaside town as it is.  There's lots to keep little ones entertained, including the pier, lifeboat museum, arcades and some lovely places for ice cream and lunches, not to mention my Mum's pottery shop.
We visited Cromer a couple of times during our stay and even saw Mr Bloom of Mr Bloom's Nursery filming in the lifeboat museum, I think Milo was probably less impressed by this than I was mind! 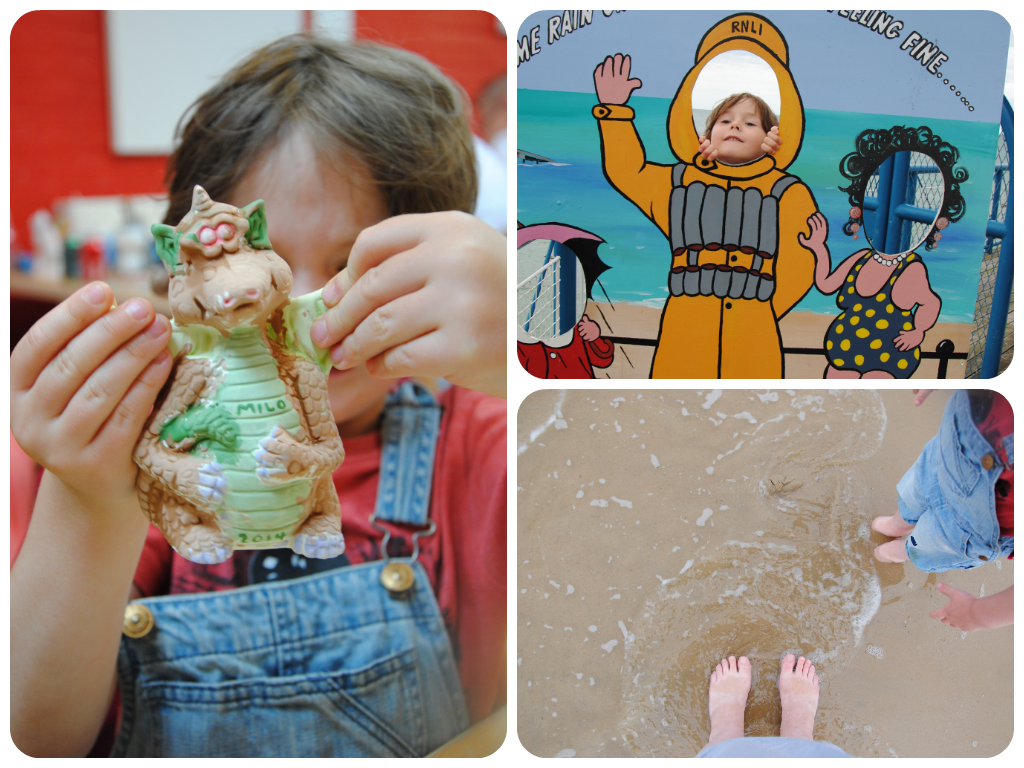 On our second day we went down to Norwich to visit my Dad and attend a beer festival.  Obviously there wasn't a lot of beer drinking for me and Milo stuck to the ginger variety, but we had a lovely day in the baking sunshine, watching rugby. When we returned to my Mum's house that evening we took a gorgeous walk along her local beach, Weybourne, as the sun was starting to set.  It such a stunning place to be at that time of day.  It's a really pebbly beach, not safe for swimming, but really interesting in terms of cliff formation and a lovely walk along the cliff tops too. 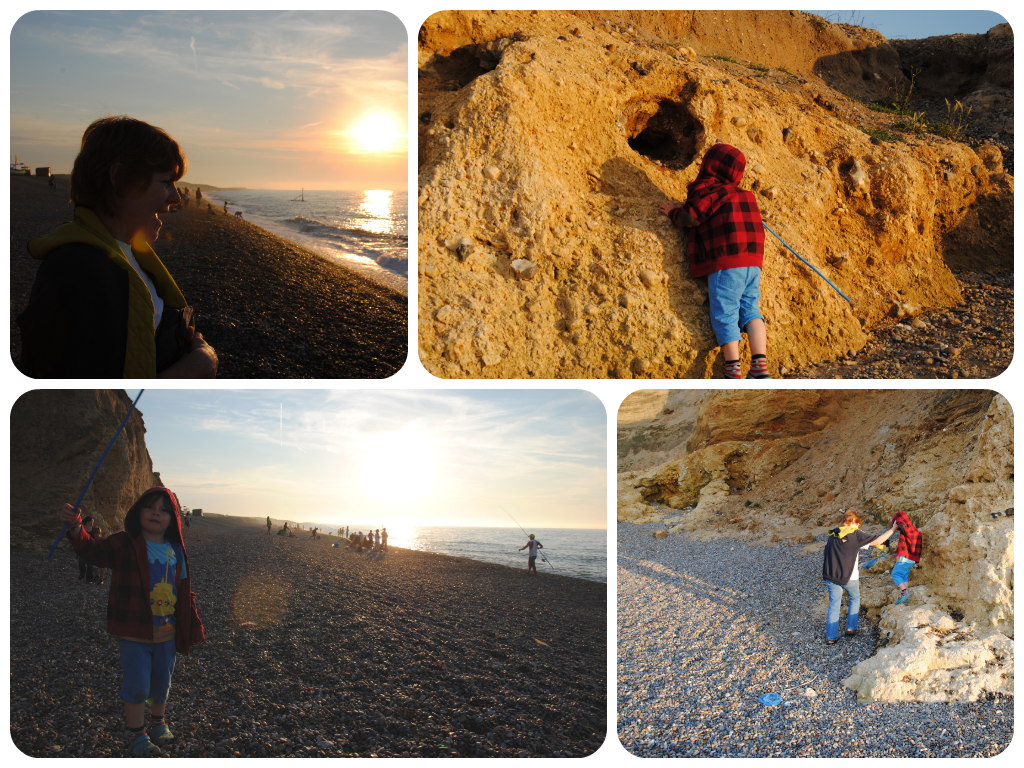 Sunday was meant to be dreadful in terms of weather so we planned a lazy day with Milo's cousins, watching movies, roast dinner and loom band creating.  As it turned out it was actually glorious, the best day in terms of weather that we were there, so instead we headed to our 5th beach of the holiday, East Runton.  Unsurprisingly positioned between, West Runton and Cromer, I think this probably has to be my absolute favourite.  Rock pools, beautiful sandy stretches, lovely and shallow seas, perfect for kids who feel no fear (Milo is definitely one of these!).  The kids had so much fun, building elaborate sandcastles, surrounded by extensive moats and rivers, jumping in the waves and searching the rock pools, you also get a lovely view of Cromer. 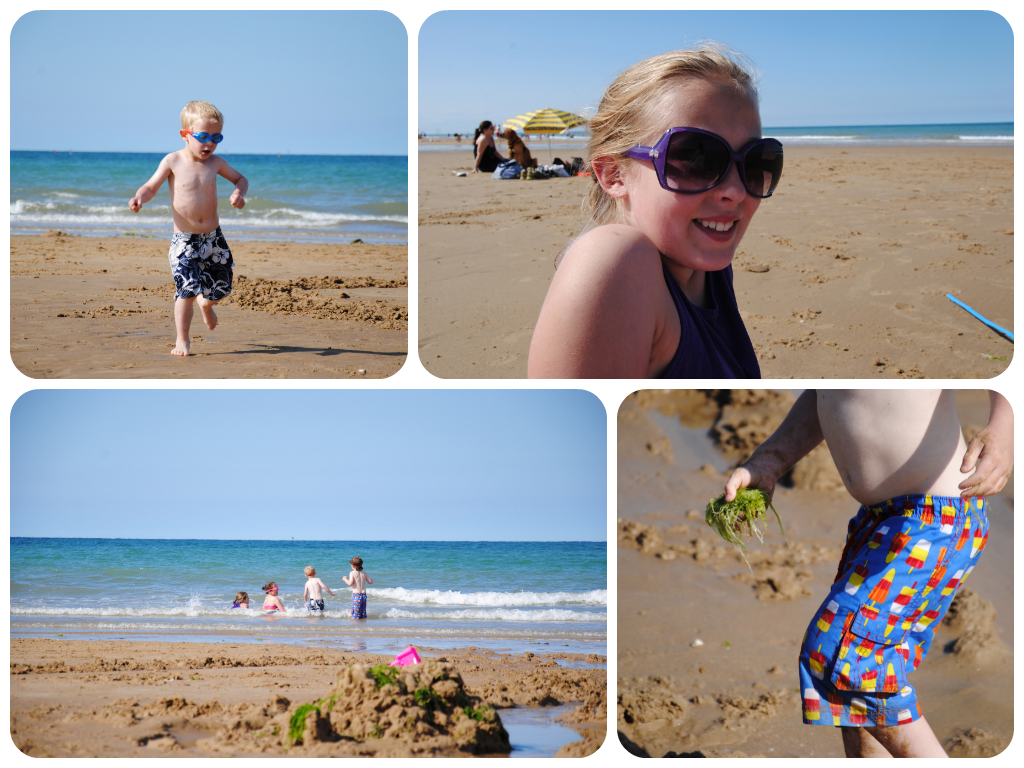 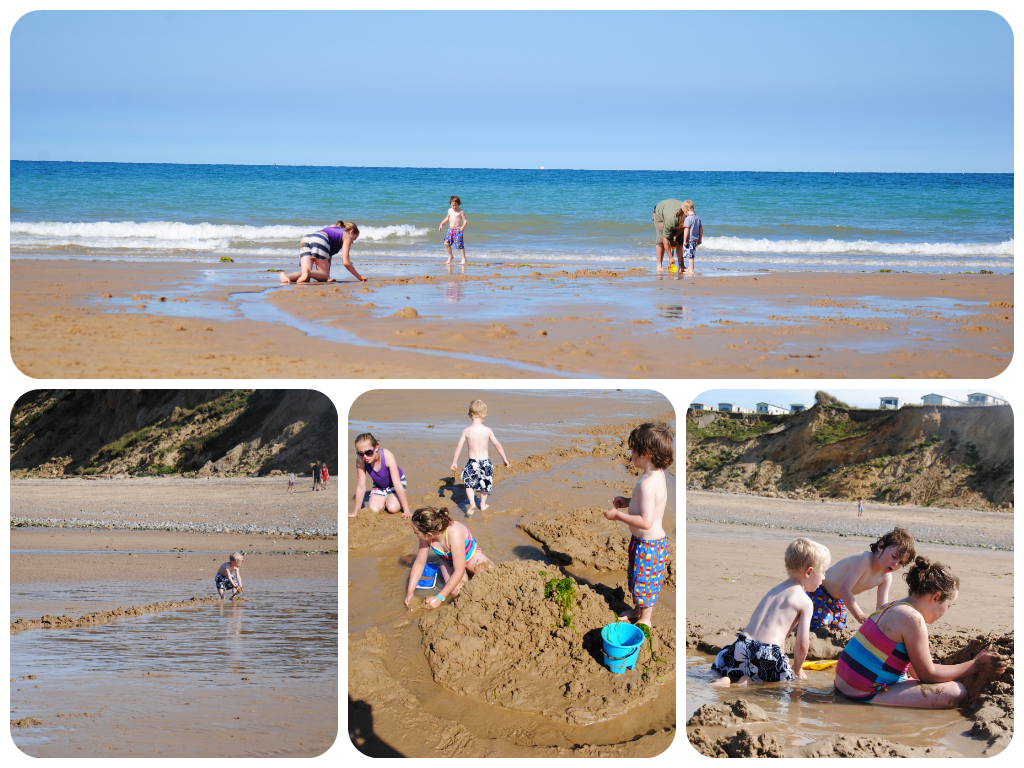 Milo adored getting to spend so much time with his cousins and cried so much when it was time to say goodbye.  He hasn't stopped asking me since, why we can't live in Norfolk.  I must admit it was glorious and it's such a beautiful place.  I may be biased but I really do think it's a fabulous UK holiday destination.  The coastline is so diverse and there are many activities to keep everyone entertained.  We didn't even have time to visit my absolute favourite beach (possibly I think in all the world, though of course I haven't visited them all), Holkham. 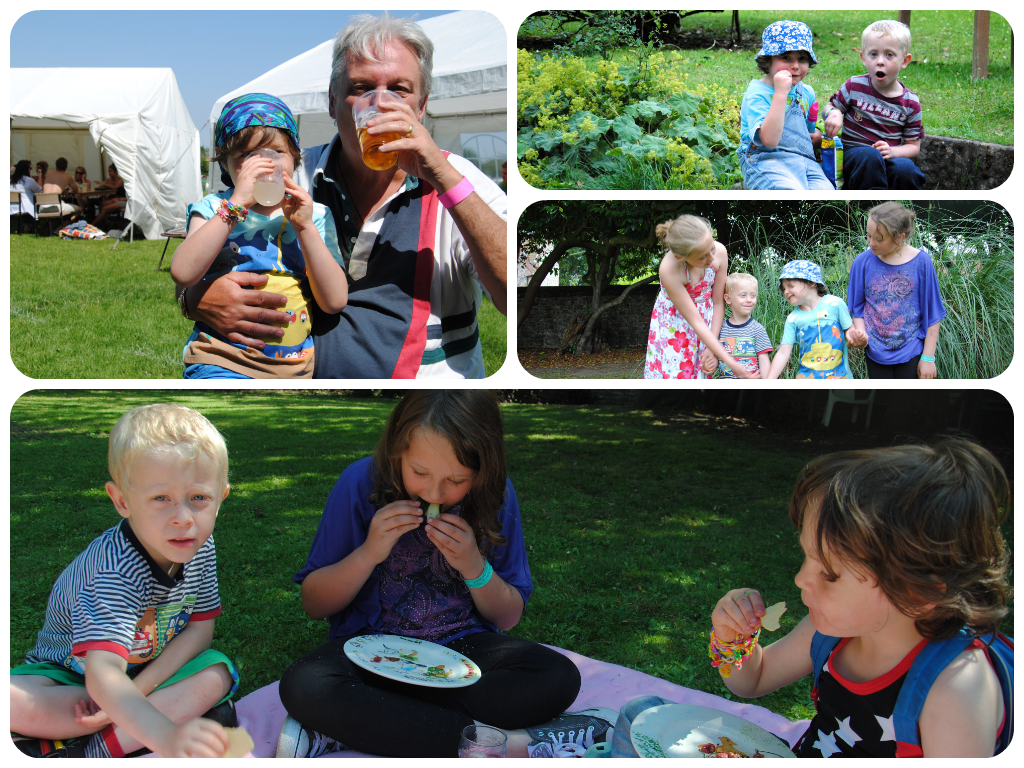 If I wasn't so pregnant I think I would probably try and fit in another visit before the summer holidays come to an end.