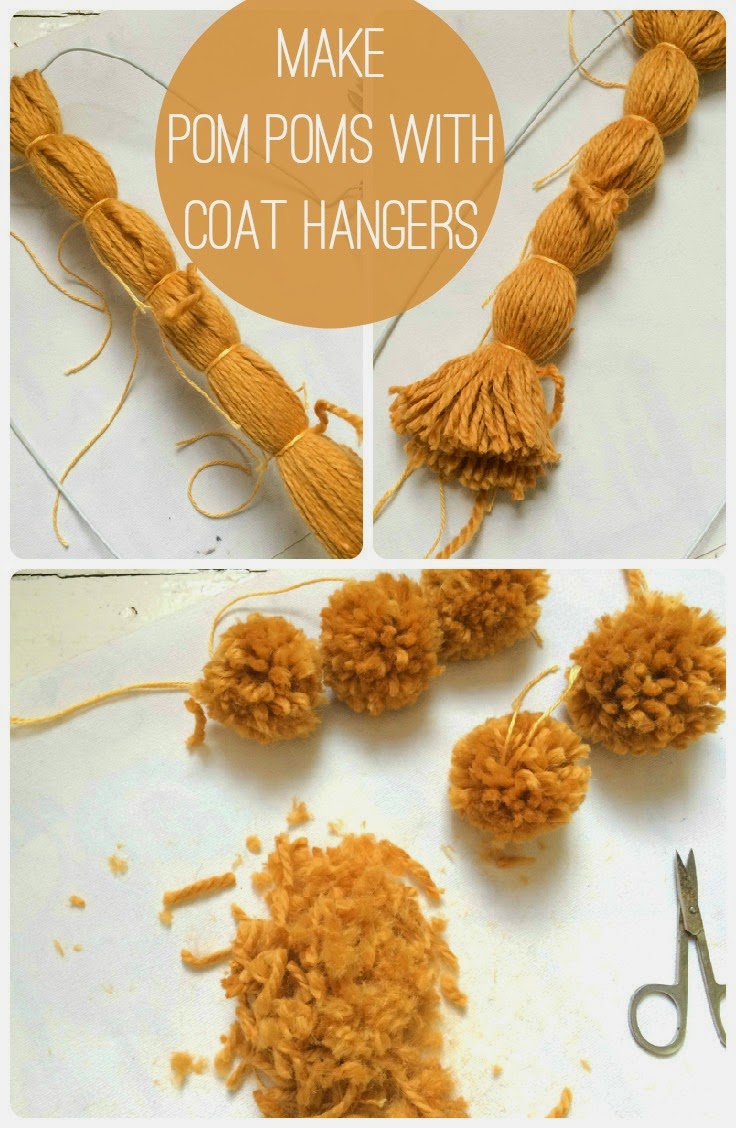 I am a big fan of pom poms, really what's not to love? Yes if you use the whole 'wrap yarn round cardboard circle' method they can be fiddly to make, but I've been making them using my hand as a template for some time now to much success. However last week I found myself needing to make a whole load of pom poms and reasonably quickly. My nephew had requested a magic yarn ball for his birthday after his sisters received one for Christmas a couple of years ago. Milo and I had a great time shopping for things to hide inside, then Milo hunted through his own toy collection for some extras to add in too. We wound it all up with white yarn. He had received a box of white pom poms as a christmas gift, which were disguised as snowballs so figured adding to this collection would be the best way of getting to all those goodies inside.
So after presenting Aston with his gift, I quickly set about winding yarn around my hand whilst he watched the ball of yarn waiting for treats to pop out. It soon became clear that this wasn't quick enough for a freshly turned 5 year old. So we had an idea to make multiple pom poms in one go, attempting to use various pieces of furniture, but realising they weren't quite right, we eventually got our hands on a wire coat hanger and came up with the method I'm going to share with you. 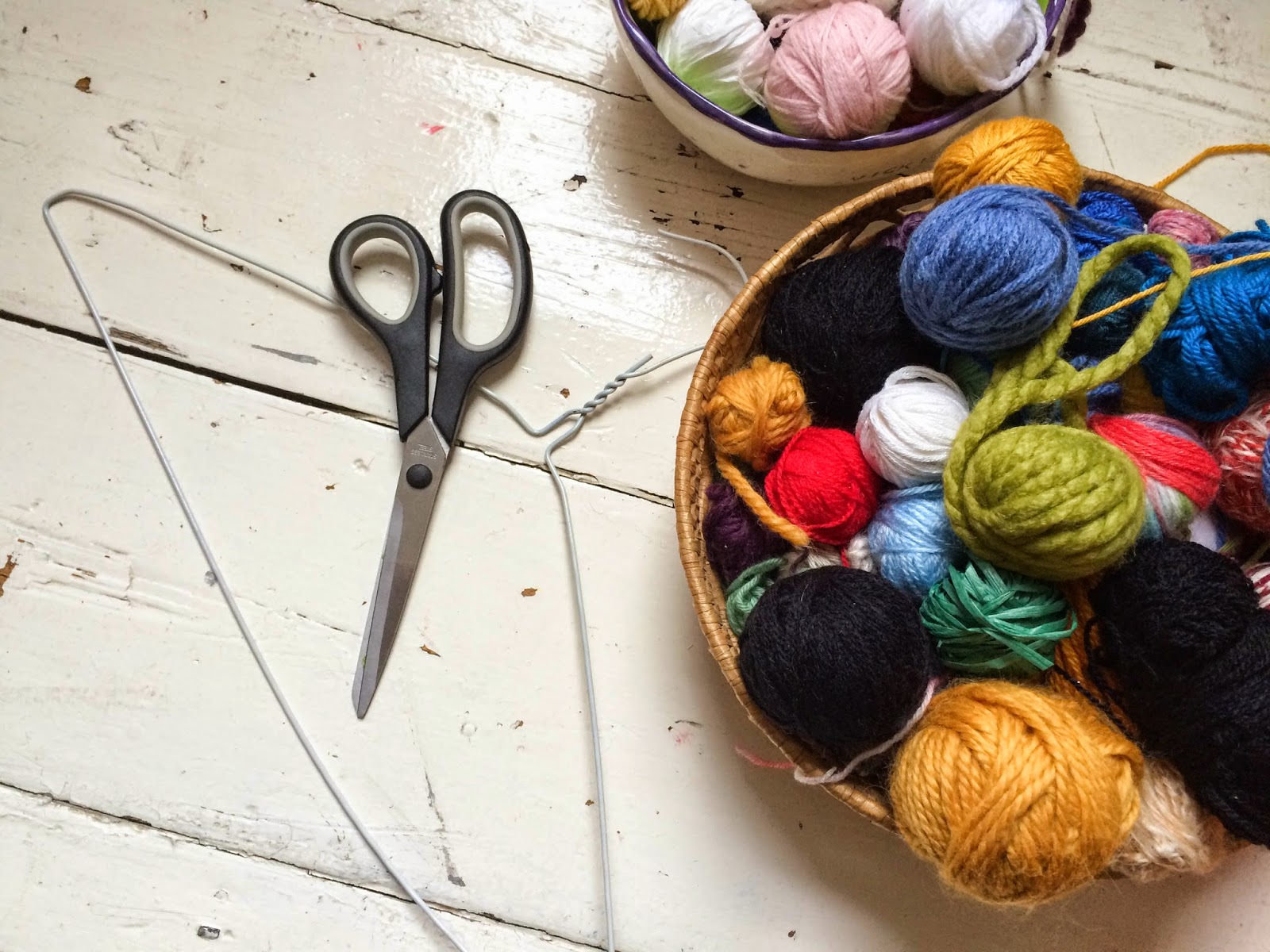 This is a super simple way of make a few pom poms in one go easily, whilst keeping the yarn attached to the yarn ball, all you need is some yarn, a wire coat hanger and some scissors. 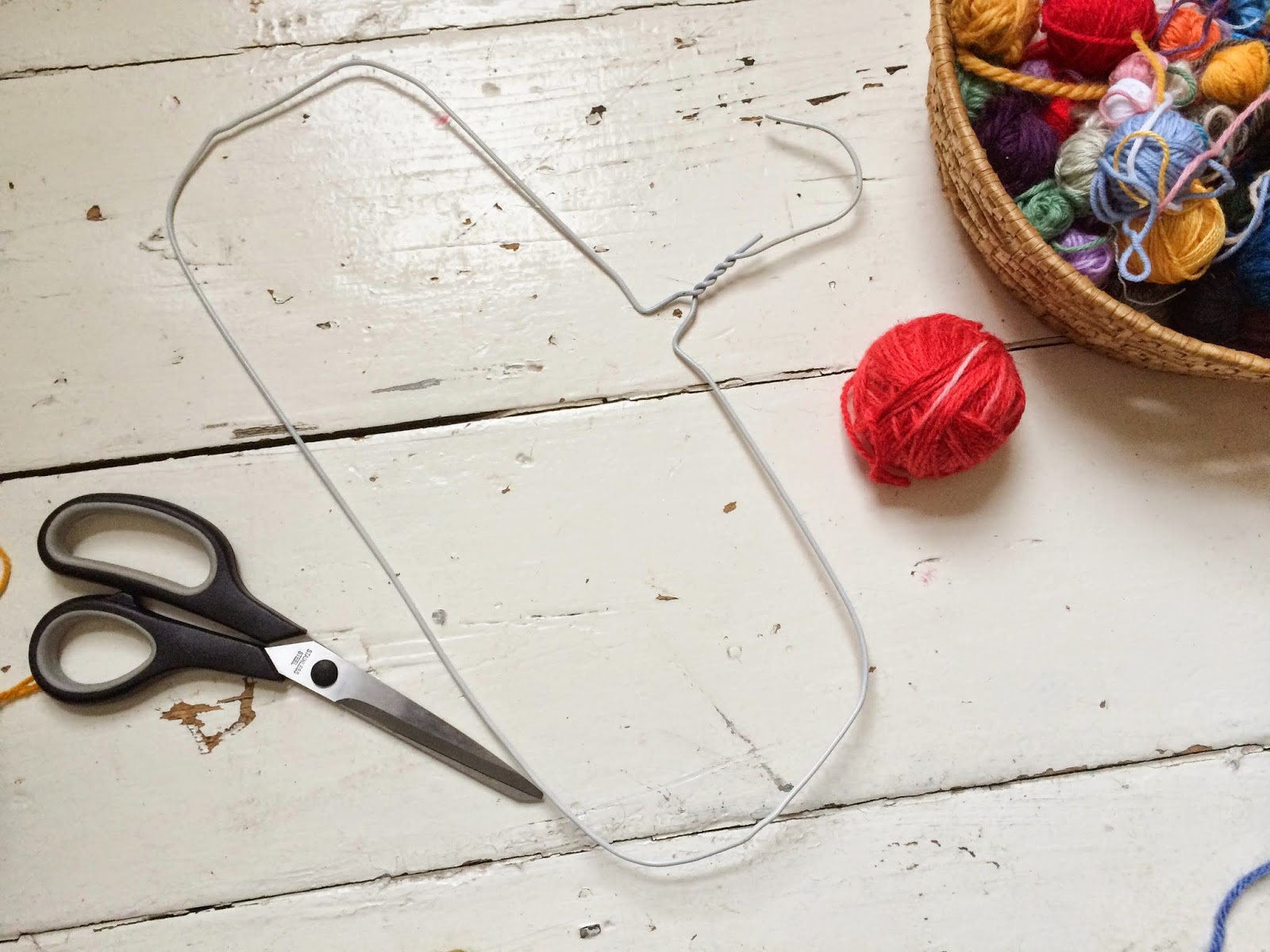 Firstly reshape your coat hanger into an oblong shape (as pictured), keeping the hook part to one side, the longer you can get your oblong, the more pom poms you'll be able to make. 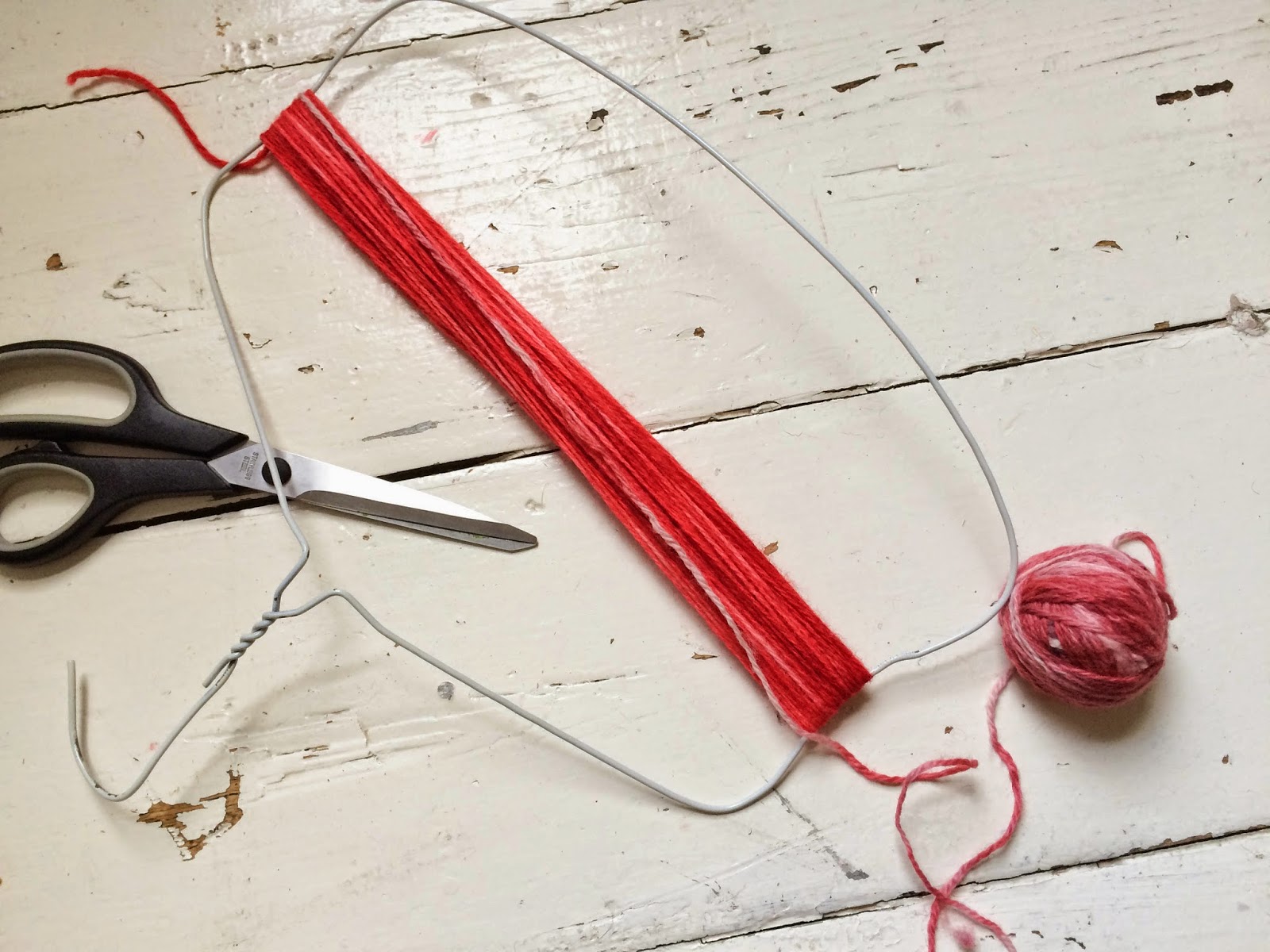 Next take your yarn and wrap it around the longest part of your coat hanger. In my experience with pom pom making, more is definitely more. If you want really nice fat pom poms you're going to have to use a lot of yarn. 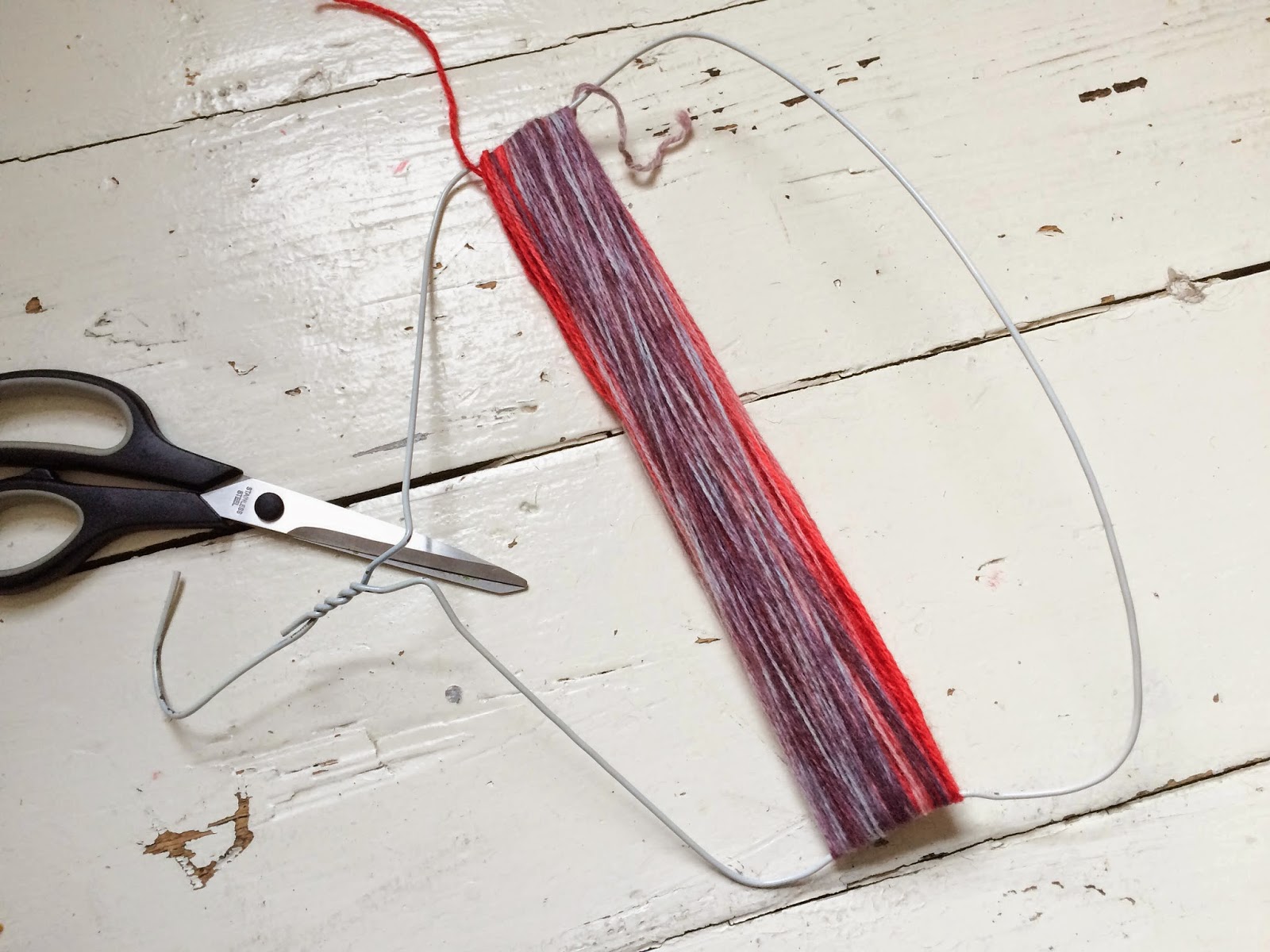 Once you feel you've wrapped enough yarn around your hanger, decide how many pom poms you want to make and cut a length of yarn for each pom pom. The more pompoms you make the smaller they'll be the fewer the larger they'll be, think about this when you are decided how much yarn to wind around the hanger. I cut my lengths about 15cm long, because I like to have plenty of room for extra knotting and making sure I've tied it tightly in place. 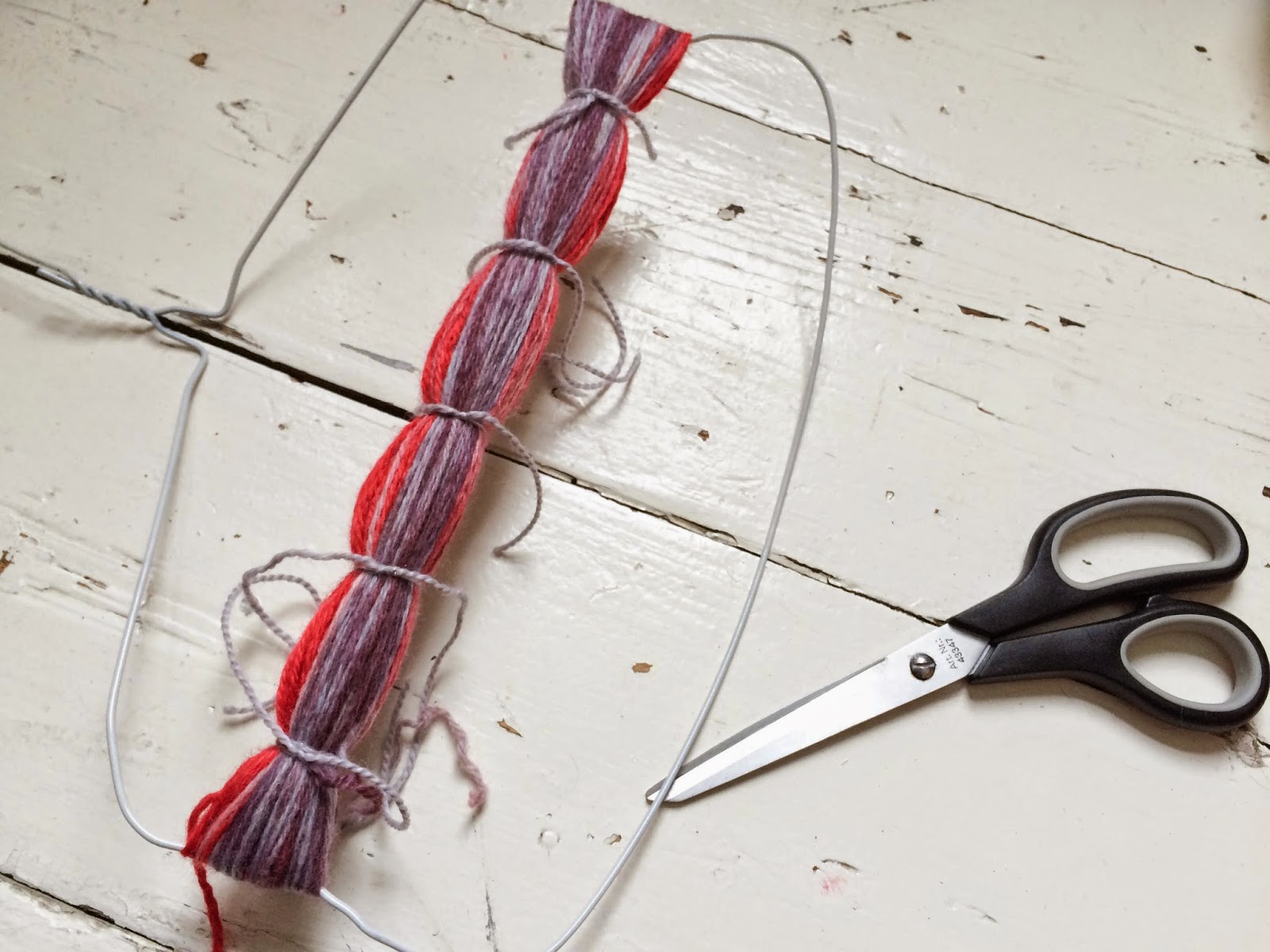 Tie your yarn, tightly, at equal points along the yarn, with the two end pieces half the distance from the end than the other pieces are from each other. 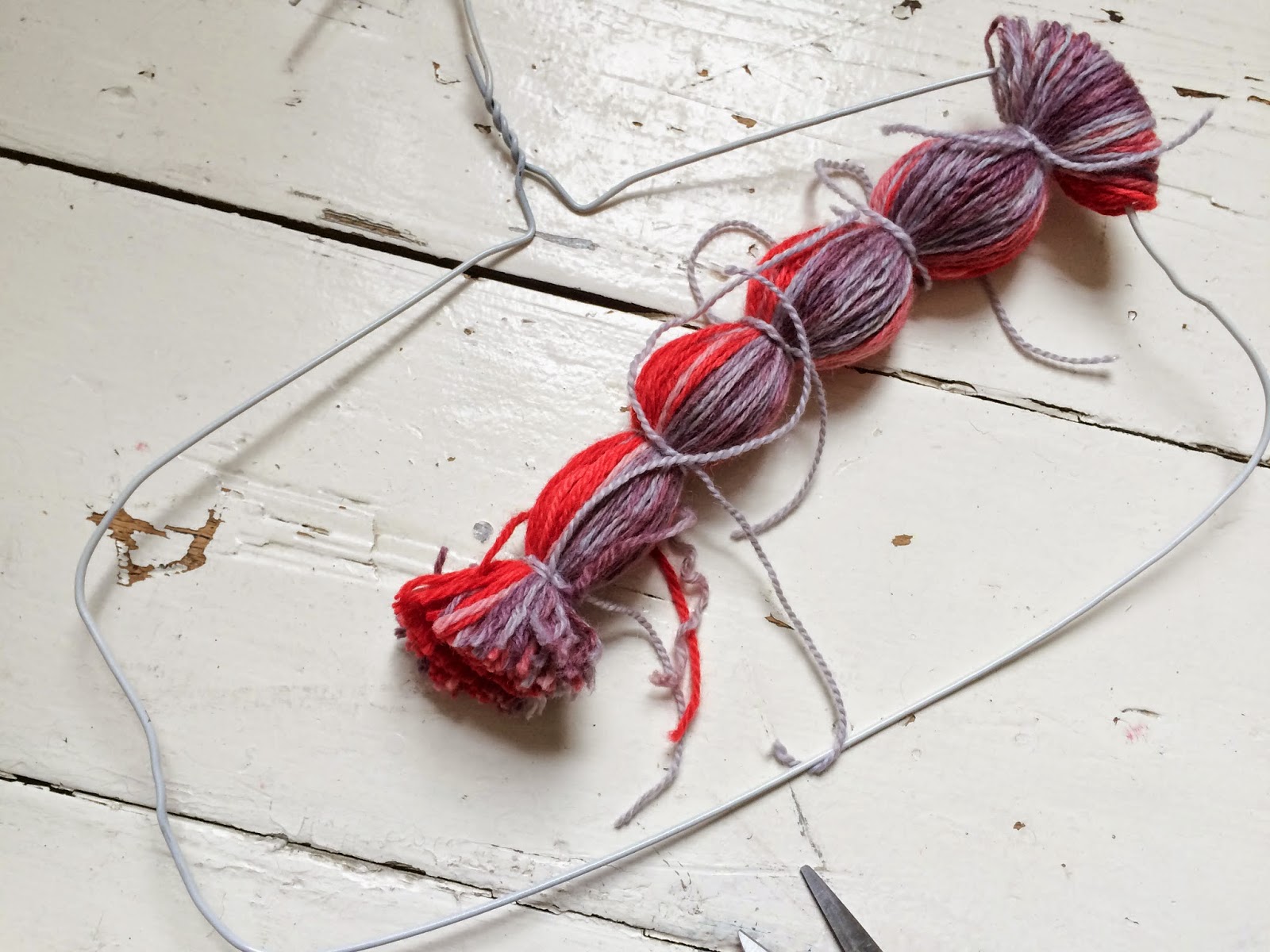 Now you can begin cutting! Snip one end of your wound yarn from the hanger, now carefully cut between the next 2 ties, releasing your first pom pom in to the world. Give him a little roll around to make him a little more ball shaped. 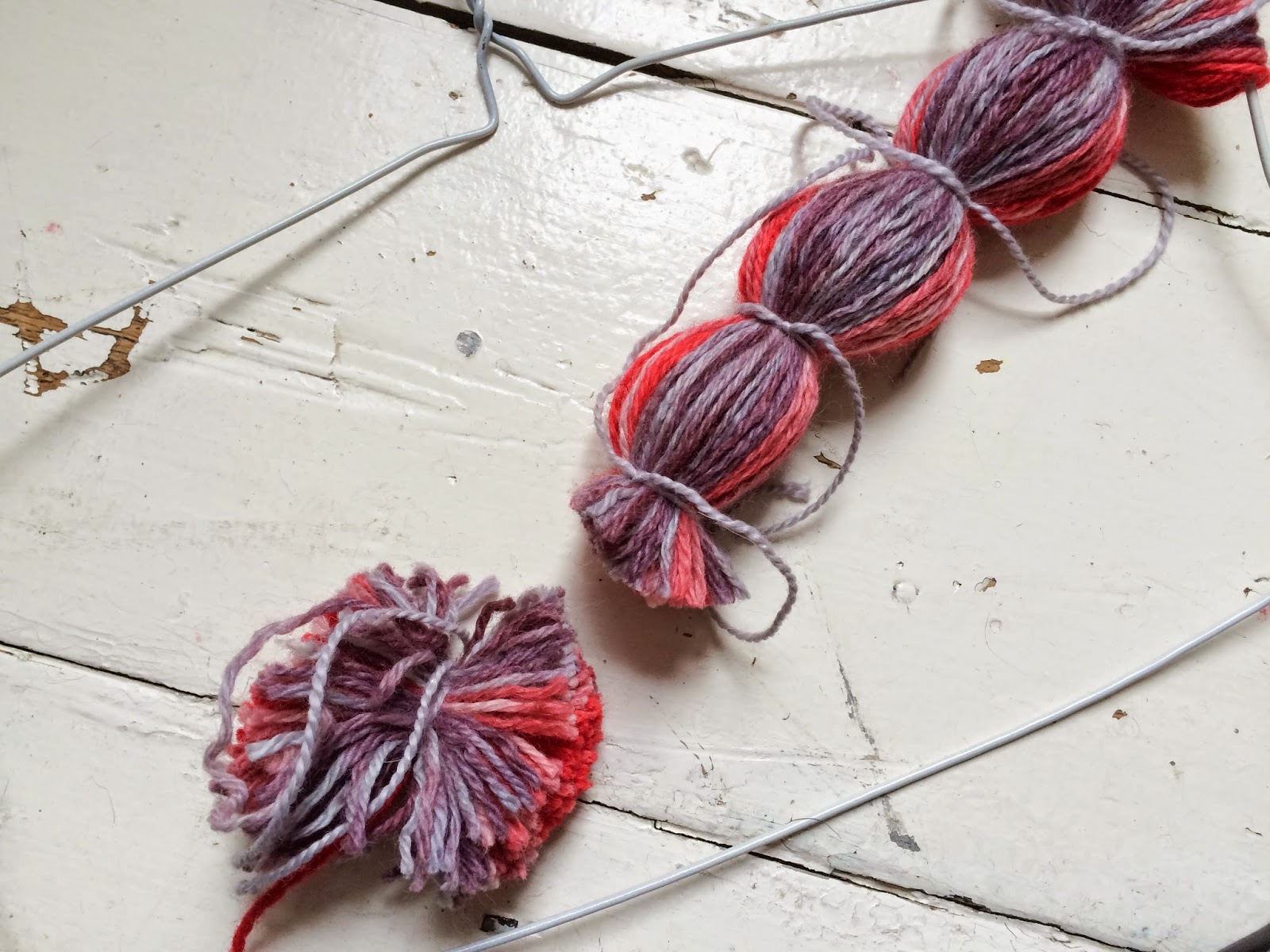 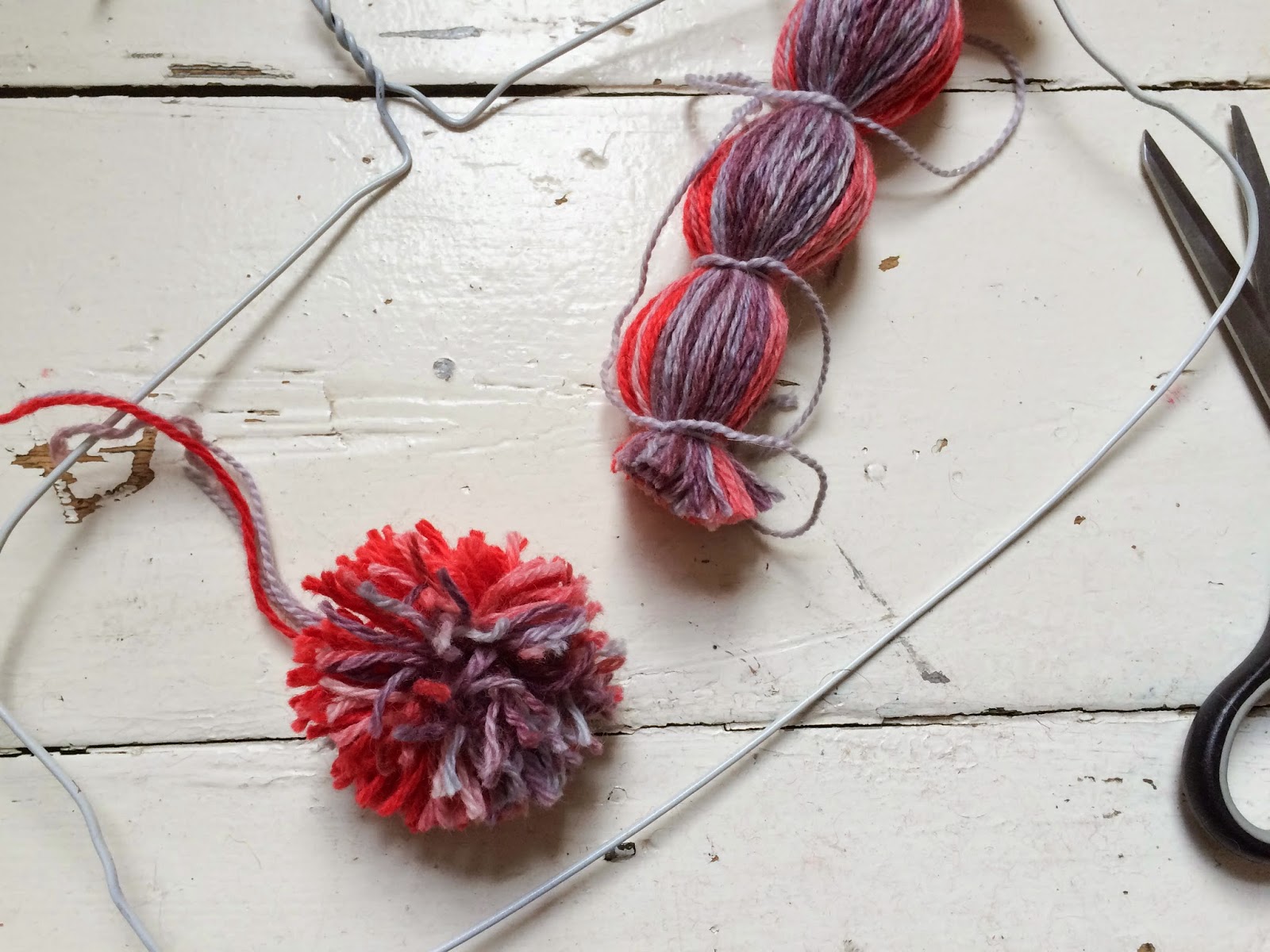 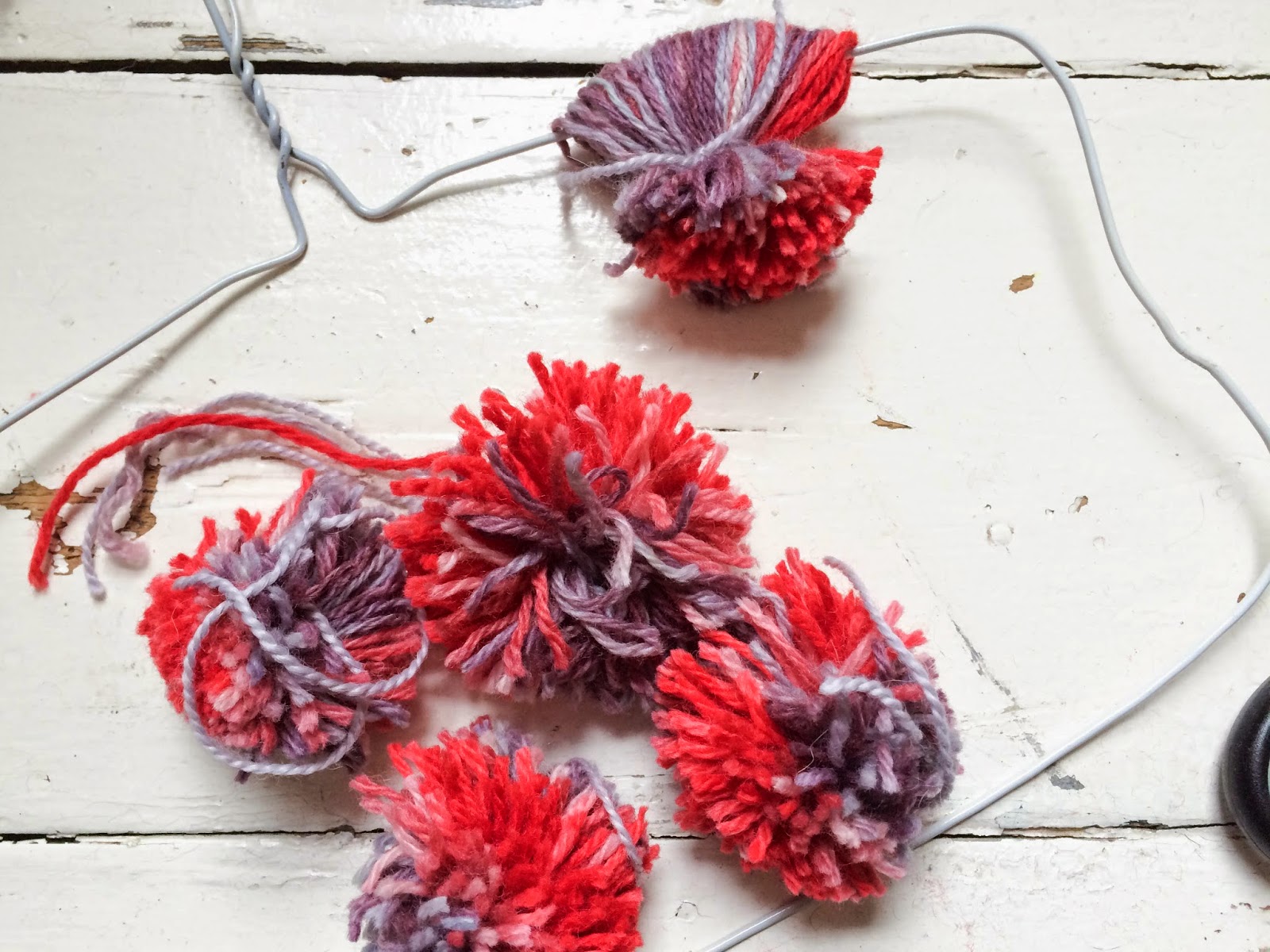 Continue to cut between each of the ties until you get to the end, then snip the last pom pom off the hanger. Now give all your pom poms a little hair cut to make them all even and round and fat. Leave the ties long if you intend to sew them on something. 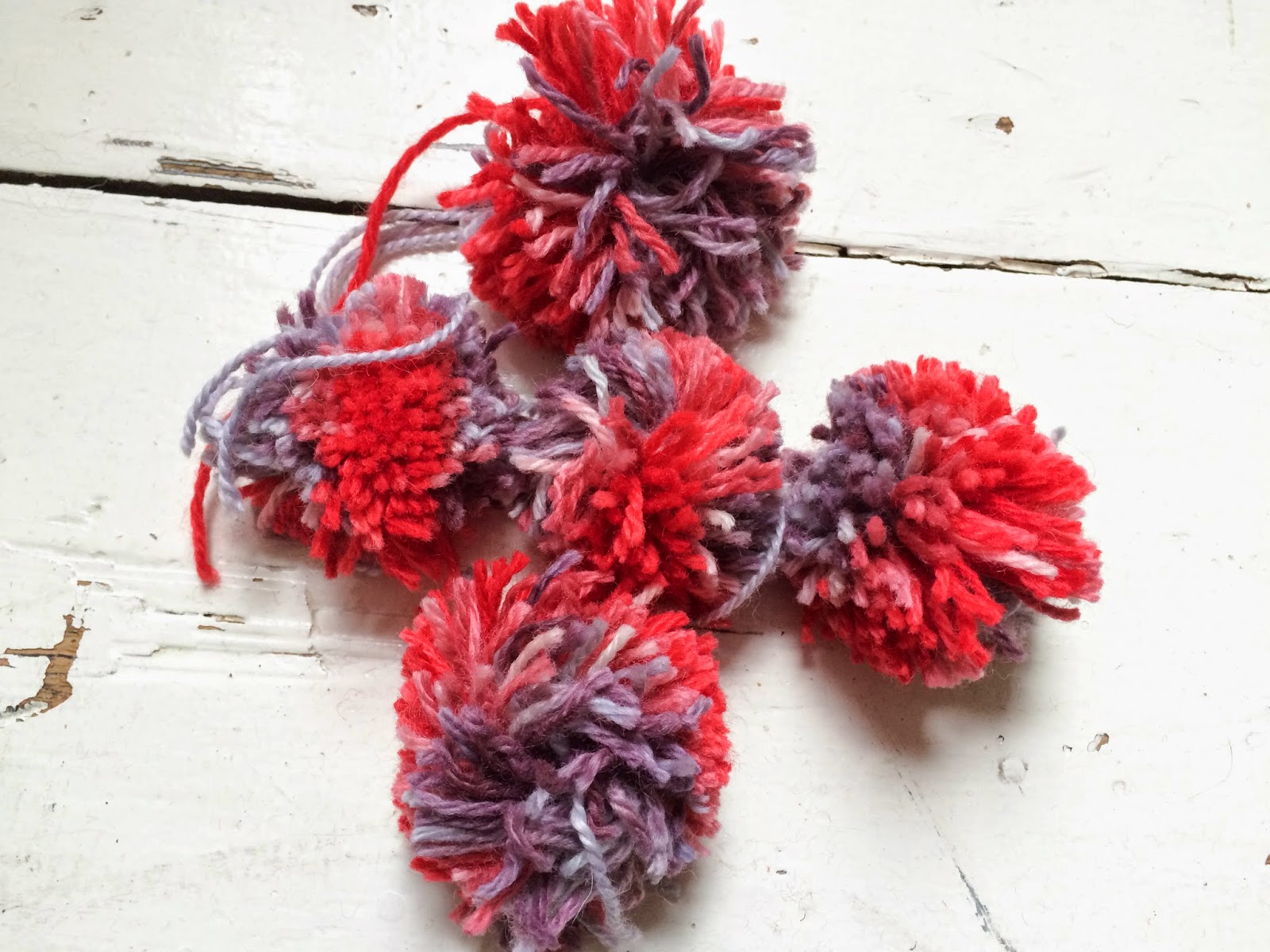 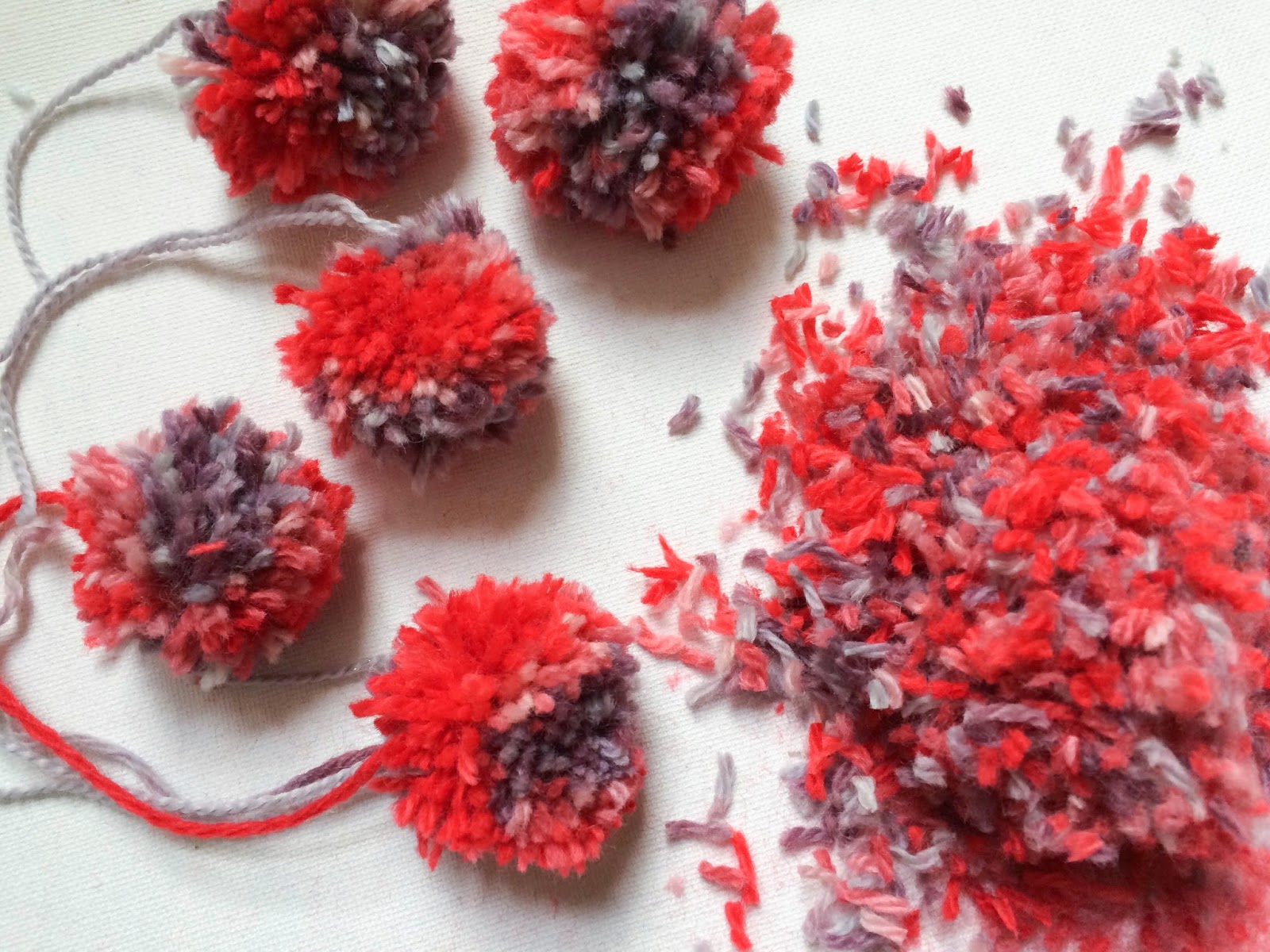 Attach your pom poms merrily to all your crafty projects, or if you're five (or a big kid inside) pretend they're snowballs and throw them at all your sisters/cousins/aunt/mum!