Menu
Cart 0
Last week Miss Effie Tallulah turned 9 months, meaning she's been out in the world growing as long as she was inside growing. She is turning into such a feisty independent little character.

Crawling is now very much established and she's quick, much too quick, she also fears nothing, so must be watched like a hawk at all times, also she will put EVERYTHING she finds on the ground in her mouth. I made a beanbag last week, so I've spent the majority of last 7 days retrieving polystyrene balls from her mouth. She's started to pull herself up now too, not on the sofas yet, but anything a little shorter and she's up. I am very much not ready for walking yet. Of course she'll probably decide to do that the week we move house, but I am hopeful it will a long way off yet, Milo was well past one before he started.

She now has two very prominent bottom teeth. She's recently discovered she can actually use these to take little chunks off things, which she seems very proud of, I love watching her bite small pieces of rice cakes off with them, a look of satisfaction in her eyes.

Routine-wise not a lot has changed since last month, still having 4 milk feeds a day, 3 meals and one nap in the morning, sometimes a little afternoon catnap if given the opportunity. 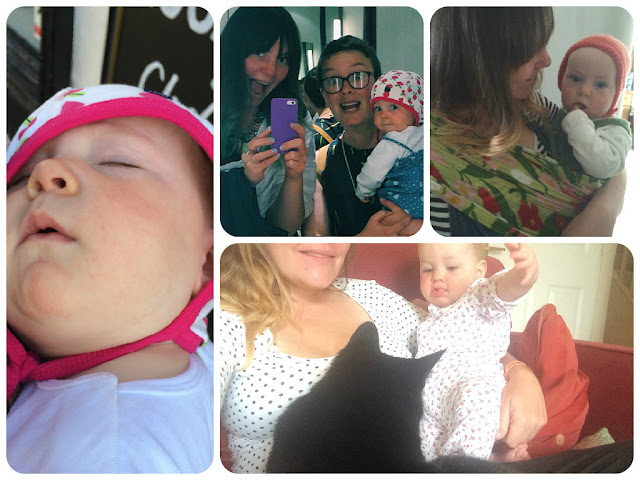 She is cheeky! She seems to understand 'no' now and is aware of the things she's not supposed to touch/put in her mouth, I can tell this by the way she looks at me whilst doing exactly that as if to say 'look Mum I'm going to do that thing you don't like'. For the most part though, when you tell her 'no' she usually does stop.

She blows kisses and gives out high fives, she tries to clap, but isn't all that successful! She'll also come to me now and put her arms up to be lifted/cuddled. I completely forgot how it feels to be needed in this way. Milo's so much older than her and so independent he rarely needs me for cuddles. It's really lovely to have someone who does, even though I know it won't last forever. Which is exactly what I keep reminding myself when I feel like she's attached my hip and I'm not getting anything done. 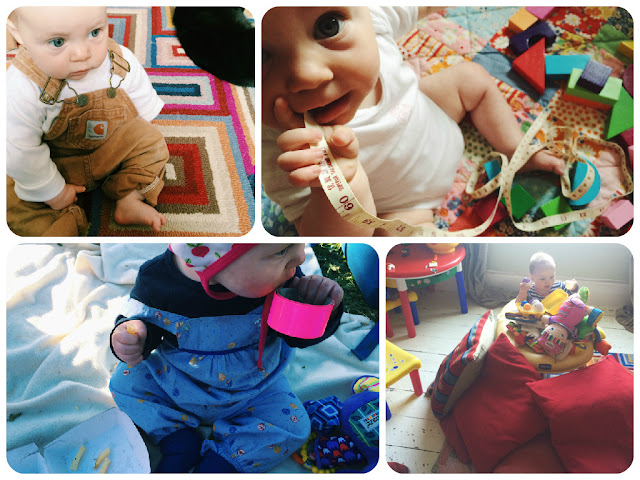 She makes a lot of sounds now and has a lot of chat, but not really any words. So far we have 'at' (cat or any kind of animal) 'dad-eee' (daddy, of course she can see daddy and not mama and calls for him regularly throughout the day when he is at work!) and as of yesterday 'ilo' (milo, which prior to yesterday was 'arah' repeated very loudly when waiting for him outside school or when he was ignoring her). I'm not going to lie it would be nice to hear 'mama' soon, but I'm sure it will come soon enough.

She's such a happy, friendly, smiley, sociable baby and I'm so lucky to have her.